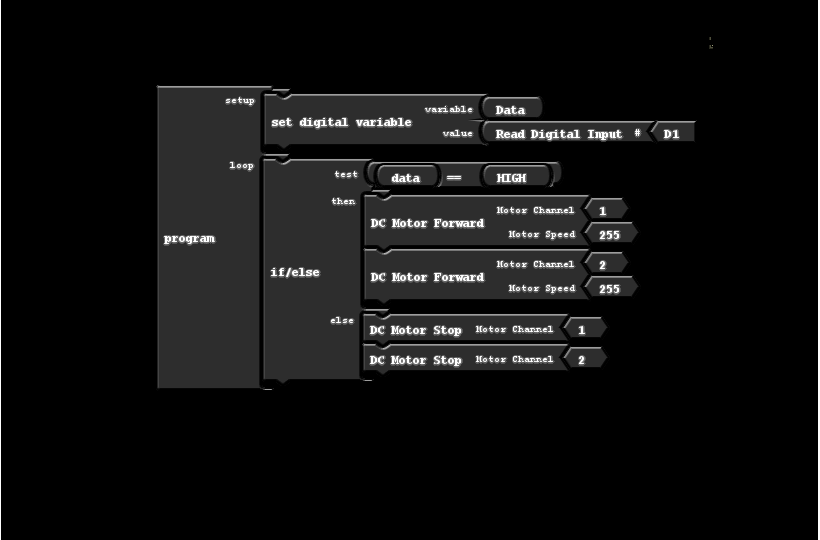 This 20 in 1 Arduino UNO compatible Robot DIY Kit provides robotic experiments on a single platform. Various Robots can be built using this kit spanning from Wireless such as RF, Bluetooth, IR and 2.4 GHz control to touch, sound and Accelerometer controlled robots.

This is specially designed robot kit for all kinds of robotic enthusiasts, from kids to adults that comes at a very affordable cost. It comes along with an integrated Arduino based Robot control board with integrated motor shield.

The board includes one L293D on board for running DC and Stepper motors with upto 1 Amps of current discharge capability. The Robot Control Board is completely compatible with Arduino IDE and has full pin compatibility with Arduino Motor Shield library. The board is preloaded with Arduino Uno Bootloader and can be programmed with other functionalities as well such as interfacing sensors, UART communications, I2C interface and many more.

Refer the below link for more understanding on setting Envionmental variables.

Ardublock is a plug-in of Arduino programming environment which is kind of Graphical User Interface for arduino IDE. ArduBlock allows user to visually program the arduino code with the use of code blocks. To understand it better, it basically lets the user to prefer logic to language.

Ardublock is a Plugin of the default Arduino IDE, so the user needs to have Arduino installed on computer to run it.

2. Set the path for  ardublock-all.jar file

The “Arduino” folder path (in above path) can be changed according to default Arduino sketchbook location.This is a folder on computer where sketches and libraries are saved by default. To find your sketchbook location, run Arduino, and open Preferences by going to File > Preferences.   Also if user is installing Arduino in the windows from the first time there may not be an Arduino folder in the  Documents.  In that case you can simply run a simple example code from Arduino IDE.

If user does not find any folder inside C->Users->Documents->Arduino, user can create an empty folder chain and rename them as per above path.

3. Start Arduino (restart it if it was already open)

Run ArduBlock by clicking Tools > ArduBlock. If the user doesn’t see an entry for ArduBlock here, he/she has to double-check to make sure the directories are all correctly typed and cased.

Robokits India has customized ArduBlock source so that it can be used to work with the robot boards available at robokits India. You can set the blocks according to your logic of the program.The screen will look like the image given below. After the completion of program block, you can generate the Arduino code by clicking on the “Upload to Arduino” button given on the upper side of the screen. The arduino code will be generated as shown in below image. Now, you can upload it to the arduiono board. ( If the board is already connected then the code will be automatically uploaded to the board. ) Robokits India gives credits to ArduBlock which can become  a great learning tool if you prefer logic to language. This block programming method enables people who even do not know much of programming language or hardware but keen to make robots based on their own logic.