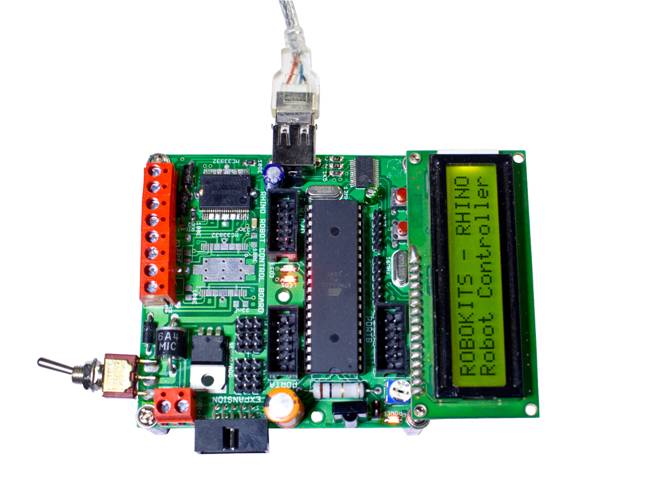 Rhino Robot Control Board is our most powerful, versatile and most easy to use robot control board from Robokits up till now. In this first part of tutorials and application notes series you will learn about basic elements of Rhino Board and Quick C – IDE Software which is a specially developed software for this board.
We also hereby assume that you have gone through Rhino Board Manual , Quick C IDE User Manual and Quick C IDE Library Reference. Its not necessary for you to understand everything written in those documents but you should have an overview so that you can use them as reference for some part in this document.
RAN1101 – Rhino Board Basic features

Required Resources for this tutorial:

There are 2 LEDs on Rhino Board. LEDs are connected to PC6(IO 22) and PC7(IO 23) of Atmega16 MCU on board. There are functions in Quick C to directly control LEDs. We can also control pins of Atmega to control LEDs. First program is for simple blinking of LED1.

This concludes the LED sections. It also shows how to set output on any pin of Rhino Board.

There is one general purpose switch on rhino board which is connected to PD.6 (IO 30). More switches may be connected to extra IOs and can be used by PORT IO functions. You may also use 8 switch Keypad or 4×4 Keypad with this board to get more switches. Second switch on Rhino is a reset switch which resets micro-controller.

This concludes the Switch Input section. It also shows how to take digital input from any IO pin of Rhino Board.

Rhino Board is capable of driving a Character LCD display with parallel interface. Display size can be 16X2, 16X4, 20X2, 20X4 and other compatible displays. For other types of LCDs like graphic LCD readymade functions and pinouts are not available, however it can be done easily like its done on any other AVR board.
Connection is very simple, Rhino board haves a 16 Pin Male header on one of the edges. Here an LCD display with 16 female header can be plugged in. There is a potentiometer for contrast adjustment.

Code 3 : Use Analog to digital converter(ADC) to take analog input and show input on LCD This concludes the LCD and ADC sections.

Rhino Board includes motor drivers either L293 or MC33932. L293 provides 1A per motor while MC33932 provides 5A per motor. However coding remains same for both boards, so program written for one board will work on other too. Motor drivers consume variable resources according to requirements and number of motors attached. If you need speed control for motors a timer and PWM pins will be consumed.

UART is most simple and most used communication protocol for microcontrollers. Rhino uses the same to communicate with PC. Also other devices can be connected on UART lines. UART lines are
already connected to onboard USB-Serial converter IC PL2303 through which Board connects to a USB port of PC. Not only this, UART protocol also allows PC to program Rhino Board.

Note : Some terminals softwares like Hyperterminal are not compatible with Rhino. You can use Robokits Super Terminal or Bray’s terminal for communication.